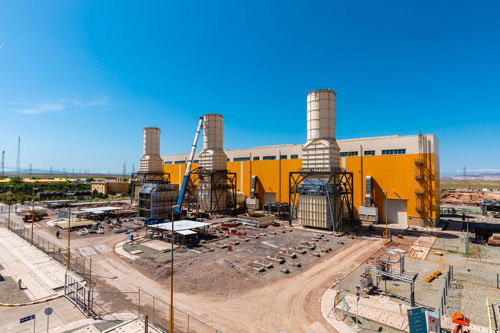 The primary construction studies of Rudshur Power Plant was started in 2001 based on the developing article 44 of Iran’s constitutional law, in order to provide the national requirements of electricity, aiming to sell the electric power in nationwide electrical network as the first power plant built through investment of EES (European Energy Systems) which is a consortium of collaborating thorough BOT method performed by MahTaab Group.

Given the location of the project, located 44 km from Tehran-Saveh highway in the shallow area of ​​the River Rudshur and considering the BOT type of contract, which both of them were direct contributors to that period, Water supply was considered a priority for financing to provide the various consumption requirement during the construction operation.

To this end, the EES as the Main Contractor of the project, conducted a tender for water supply and select a qualified contractor based on a timely observation.

As the first subcontractor in the implementation of the project, Sadrab Sanat started the construction of the consumable water facilities, and assigned all the tasks in the shortest possible time without any time-lapse and accomplished the supply of drinking water and industrial targets at this location without fail.

Sadrab Sanat has been honored to receive a certificate of appreciation for executing this high- quality project in accordance with the schedule set by the Consortium of External Contractors (European Energy Sys).

Today, generating of more than 2000 MW of electricity in the national wide is regarded as one of the honors of the private sector investment for the Rudshur power plant as well as for Sadrab Sanat.

Sadrab Sanat Company always focuses on the Sustainable Development Goals of 2030 of the United Nations, which is the first priority of the company’s development plan. It is also possible to export electricity through connection to the national network of neighboring countries such as Iraq and Afghanistan, which in addition to developing countries in the region will increase non-oil exports and, of course, increase GDP and ultimately economic growth in Iran.

At present, the private sector, by implementing similar power plant projects, has produced about 15% of the surplus electricity consumption in most of the time of the year, and the export of this surplus electricity production is always easily possible for the country.