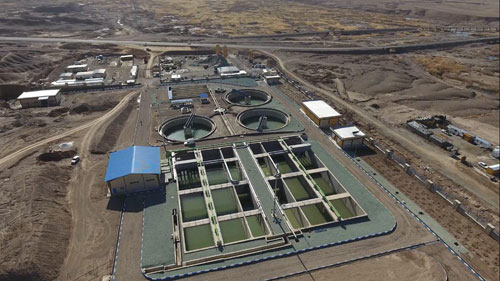 Tehran, the Capital of Iran is titled as one of the most crowded cities in the world with the population of over 12 million and therefore, growing population  and city extension during the last two decades, have led to air pollution and huge traffic which are considered as the main problems of this city and these matters caused government experts to seek for effective solutions and finally the proposal of  “The Transmission of Administrative Capital and 18 Ministries with the Subsidiary Departments” was approved in 2011, through which, a lot of government staff and customers along with their traffic would move from Tehran.

Following the subject, the primary studies for the new location began and finally, the newly established city of Parand located 30 Km from south west of Tehran was recognized the most suitable place for its unique strategic location with accessibility to the main highways of Qom and Saveh cities and proximity with Imam Khomeini international airport (IKA) and also constructing Tehran to Parand Metro line.

At the first phase of the project, 400 ha of land was reserved for transferring the ministries. Due to the first priority for the ministry of urban development during the 10th government was to quickly build and accomplish the foundation of the city, the construction of Parand waste water treatment plant was put to tender in the year of 2012.

Based on the importance and necessity of acceleration of the project, a joint venture of Civil & Electromechanical contractors was formed to proceed the operation.

Sadrab Sanat company has had the honor of winning the tender among some of Iranians leading company’s and considering the significance of time schedule of the project execution and emphasis of consulting engineers at Ray-Ab company in all stages. Sadrab Sanat could show the determination and accuracy in performance with the best quality.

On the other hand, the SDG9 and SDG11 Sustainable Development Goals are also considered in this project due to the implementation of flexible infrastructure based on (SDG11) “Make cities and human settlements inclusive, safe, resilient and sustainable”, and with innovation and development in Parand city, it will be identified as stable and resilient city based on the theme of (SDG9)  “Build resilient infrastructure, promote inclusive and sustainable industrialization and foster innovation”.

Finally, in a nutshell, the project was accomplished with the approach of reusing wastewater to irrigate the city’s green space system, as well as transferring the treated wastewater to the Rudshur plant for use in the plant’s Cooling System, and also implementing a modern treatment plant with the latest knowledge of Sludge disposal to produce methane gas to generate energy for heating.

All of these implementations are in line with SDG9, SDG6 and SDG11 of United Nations Development Goals.