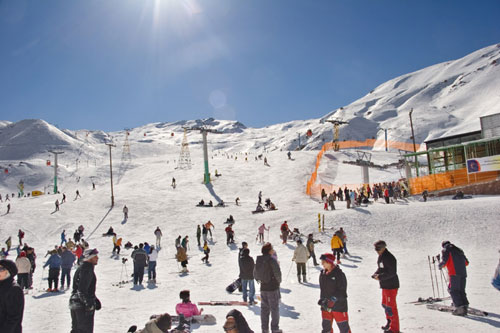 Karaj river in the Central Alborz mountain range of northern Iran, is one of the two main drinking water provider sources of Tehran city with the population of 12 million people and its accessing route of Chaloos or Kandovan Road or Road 59 are best known as one of the top five beautiful mountain roads in the world.

This river originates from the northern slopes of Asara mountain located 42 KM from north east of Karaj city and at the middle, the route meets five other subsidiary rivers that are joined in Amir kabir dam (also known as Karaj Dam) on Karaj river which was constructed as the first multi-purpose dam in Iran to supply tap water for Tehran alongside, developing the agricultural use in karaj. It supplies the irrigation demand of over 50,000 hectares (120,000 acres) of farm land near Karaj. The lake behind the dam is a touristic attraction while being a natural habitat for rainbow trout as well.

The ecliptic concrete structure of Amir Kabir dam is 180 meters high, with 30 meters length on bottom and 390 meters on top and its water shed is 764 KM long.

The river has the capability of Purification due to the strong water flow that passes through rock ribbed areas in the route of Karaj river. As the result of the river location in a resort region and also, its proximity to recreational centers such as restaurants, villas, private gardens and etc. and lack of waste water plant in these villages on the margin of the river caused the accession of contaminated sewerage water produced by small human communities to the river without any prevention and finally discharging to Karaj dam and polluting its water.

“Tehran Province Domestic Water and Wastewater Company” received a loan from the World Bank following the matter and held multiple tenders in implementation of different parts of Networks, Main pipe line, Pump station and Wastewater treatment plant of the villages of this area and therefore, Sadrab Sanat company has had the honor of fulfilling various successful projects in every aspect such as Dizin town waste water treatment plant, Hasanakdar town network and main Pipe line for sanitary treatment plant and also for Sarvedar town main pump station for transferring waste water to treatment plant in 45m higher level.

Sadrab Sanat is honored to receive the appreciation letter for implementation of the World Bank projects due to its high-quality performance and time schedule determination.

Implementing this project in order to protect Karaj Dam which is the largest and oldest water supply in the capital city of Tehran with a population of 20 million. Sadrab Sanat has also stepped up its sixth Sustainable Development Goal (SDG6). Proper infrastructure has prevented communities from migrating from villages to the slums around Tehran and Karaj.

This will have a good approach to the UN Sustainable Cities & Communities 11th Goal.